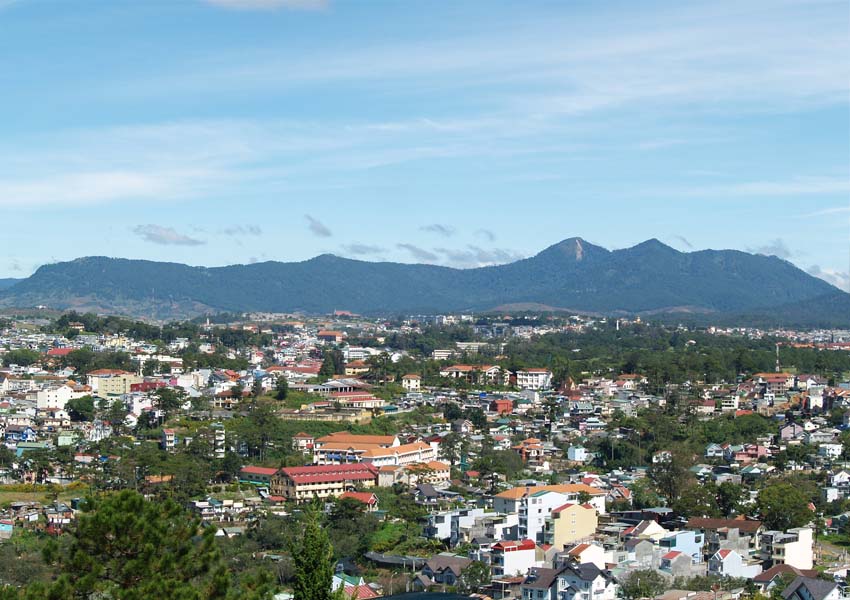 Da Lat has been called a miniature Paris for year-round cool climate and beautiful scenery as their park. Da Lat city is also home to the most popular newlywed couple on their honeymoon.The industry is mainly of Dalat's flower growing fruits and vegetables, but tours are the most important contribution to the economy of the city.
The Dalat true hospitality. The smile is an indispensable part of local culture. One of the charms of Dalat is a comfortable way of life, innocent of the city. Visitors can see the Dalat walked slowly as if the difficulties of life of hardship do not have to bother them much.
Dalat is famous for artichoke and strawberry. The climate and soil of Dalat is ideal for growing strawberries and mulberries. This is one of the major components along with grapes make the wine taste great Dalat. 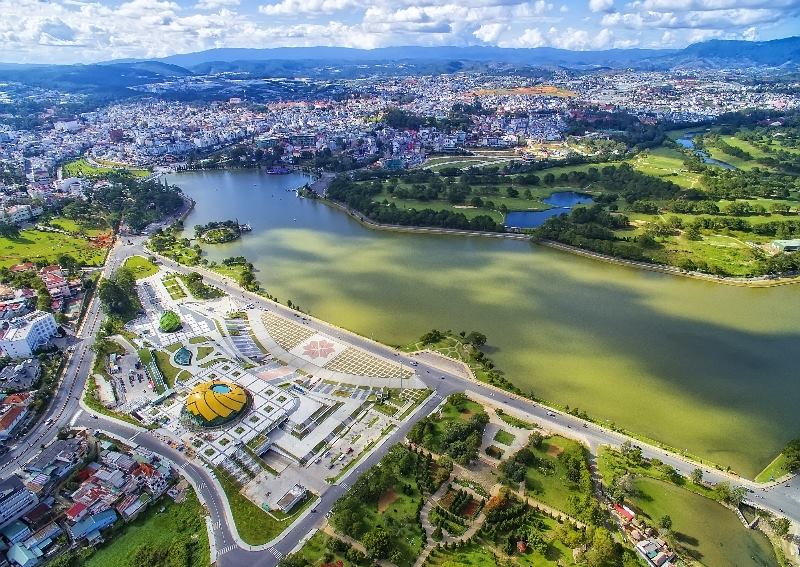 Đà Lạt or Dalat (pop. 206,105 as of 2009, of which 185,509 are urban inhabitants) is the capital of Lam Dong province in Vietnam. The city is located 1,500 m (4,900 ft) above sea level on the Langbiang Plateau in the southern parts of the Central Highlands (in Vietnamese, Tây Nguyên). In Vietnam, Da Lat is a popular tourist destination.
Da Lat’s specific sights are pine wood (forming the name: “City of thousands of pine trees”) with twisting roads and tree marigold (Vietnamese: dã quỳ) blossom in the winter. The city’s temperate weather stands in contrast to Vietnam’s otherwise tropical climate. Mist covering the valleys almost year-round leads to its name “City of eternal spring”.
Da Lat is also known as an area for scientific research in the fields of biotechnology and nuclear physics.
With its year-round cool weather, Da Lat supplies temperate agriculture products for all over Vietnam, for example: cabbage and cauliflower. Its flower industry produces two typical flowers: hydrangea (Vietnamese: cẩm tú cầu) and golden everlasting (Vietnamese: hoa bất tử). The confectionery industry offers a wide range of mứt, a kind of fruit preserve made from strawberry, mulberry, sweet potato, and roses.
Name
According some sources, the name derives from the acronym of the Latin phrase 'Dat Aliis Laetitiam Aliis Temperiem' ("Giving Pleasure to Some, Freshness to Others"), which the French colonial government used in their official emblem of Đà Lạt. In reality, the name Da Lat derived from the language of the local ethnic group Lạt and its original meaning is "Stream of the Lạt," and the acronym above is in fact a backcronym. 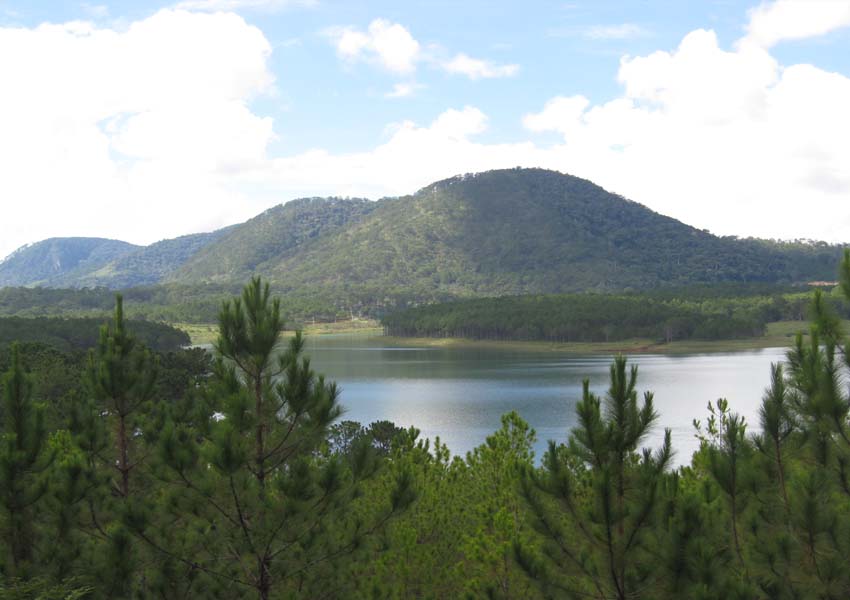 History
During the 1890s, explorers in the area (including the noted bacteriologist Alexandre Yersin, protégé of the renowned French chemist Louis Pasteur), which was then part of the French territory of Cochinchina, asked the French governor-general, Paul Doumer, to create a resort center in the highlands. The governor agreed. The original intended site for the hill station was Dankia, but Étienne Tardif, a member of the road-building expedition of 1898-99, proposed the current site instead. In 1907, the first hotel was built. Urban planning was carried out by Ernest Hébrard. The French endowed the city with villas and boulevards, and its Swiss charms remain today. Hébrard included the requisite health complex, golf course, parks, schools, and homes but no industry. The legacy of boarding schools where children from the whole of Indochina were taught by French priests, nuns, and expatriates lasted until the end of French rule. There were seminaries of Jesuits (such as Pius X Pontifical College) and other orders. The elite Vietnamese National Military Academy graduated its first class of future leaders in 1950. There was an aviation school at Cam Ly Airport.
During World War II, Dalat was the capital of the Federation of Indochina, from 1939 to 1945.
In the mid-1950s, the Vietnamese Scout Association established their national training grounds at Dalat.
The only major involvement Da Lat had during the Vietnam War was within the 1968 Tet Offensive. Fierce battles raged from January 31 to February 9, 1968. Most of the fighting took place between the South Vietnamese MP units stationed in Đà Lạt and the Việt Cộng (VC) forces. Defeats and victories alternated between the two during the sporadic yet intense battles. However, the South Vietnamese MPs were eventually able to regain control of Đà Lạt. It is stated that around 200 VC were killed-in-action (KIAs) during this battle. Although South Vietnamese MP forces were known to have significantly fewer KIAs, their injured list grew steadily throughout the engagement due to periods of low supplies and support. What ultimately saved the South Vietnamese MPs was the fact that they held strong defensive positions throughout Dalat from the beginning to the end of the battles.
Geography 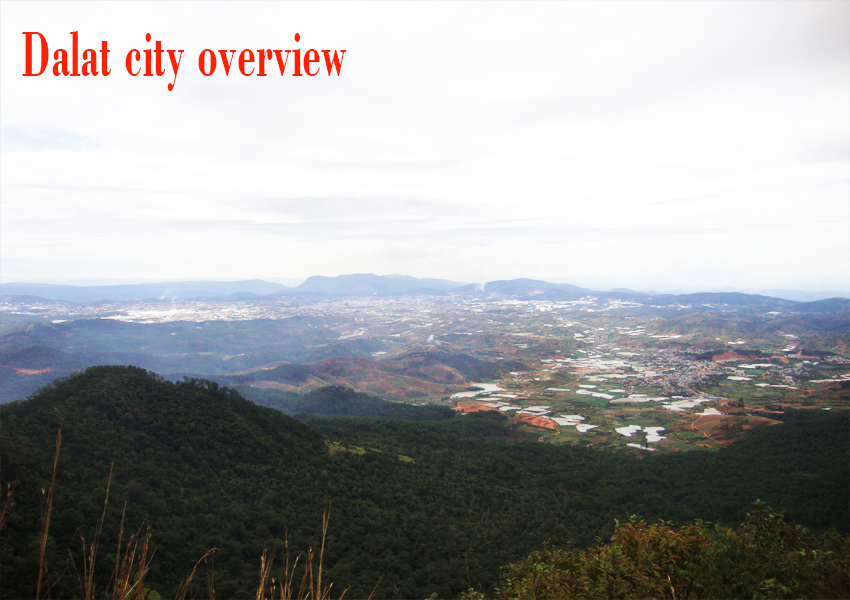 Đà Lạt is located 1,500 m (4,900 ft) above sea level on the Langbiang Plateau in the southern parts of the Central Highlands (in Vietnamese, Tây Nguyên).
Geology
Đà Lạt is a source area for tektites from the Australasian strewnfield.
Administrative
Đà Lạt is divided into 12 wards which are named as a number from 1 to 12, and 4 communes: Ta Nung, Xuan Truong, Xuan Tho and Trại Hầm.
Climate
Da Lat’s year-round temperate weather, standing in contrast to Vietnam’s otherwise tropical climate, has led it to be nicknamed the “City of eternal spring”. The average temperature is 18°C - 25°C. The highest temperature ever in Da Lat was 27°C, and the lowest was 6.5°C. Mist covers the adjoining valleys almost year-round. Its temperate climate also makes it ideal for agriculture. Indeed, Da Lat is renowned for its orchids, roses, vegetables, and fruits. There are nascent wine-making and flower-growing industries in the region.
There are two separate seasons in Da Lat. The rainy season lasts from May to October, and the dry season is from November to April. The average annual precipitation is 1,750mm.
Da Lat is home to the man-made, 5 km² Xuan Huong Lake. As of early 2010 the lake has been almost completely drained, due to some repair works on the locks and a bridge that control the flow of water into the lake. As of October 2011, the lake is completely filled and back to normal. Da Lat's weather is somewhat similar to the Bay Areas weather in the past. As of now it has changed in an enormous way.
A rock garden in front of the Art Deco-influenced Đà Lạt Railway Station. 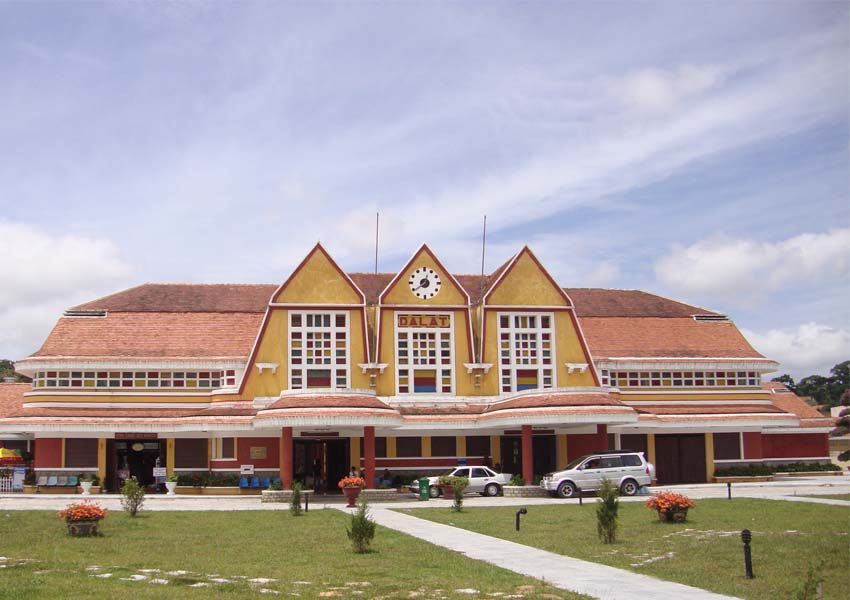 The architecture of Đà Lạt is dominated by the style of the French colonial period. Đà Lạt Railway Station, built in 1938, was designed in the Art Deco architectural style by French architects Moncet and Reveron, although it incorporates the high, pointed roofs characteristic of the Cao Nguyen communal buildings of Vietnam’s Central Highlands. The three roofs, said to represent the three peaks of Đà Lạt’s iconic Lang Biang mountain, are also reminiscent of Normandy’s Trouville-Deauville Station. The station’s unique design—with its roofs, arching ceiling, and coloured glass windows—earned it recognition as a national historical monument in 2001. The Dominion of Mary (French: Domaine de Marie) Church and Convent, home to Roman Catholic nuns of the Mission of Charity, were built in 1938 with a similar pointed-roof style.
Hằng Nga guesthouse is decorated with twisting organic forms. 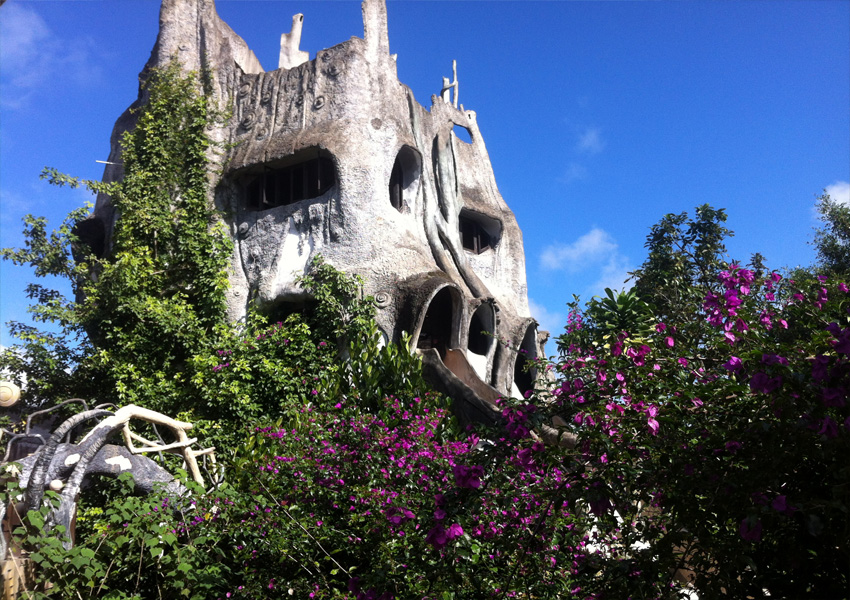 Of particular note is the unconventional architecture of the Hằng Nga guesthouse, popularly known as the “Crazy House”. Described as a “fairy tale house”, its overall design resembles a giant banyan tree, incorporating sculptured design elements representing natural forms such as animals, mushrooms, spider webs and caves. Its architecture, consisting of complex, organic, non-rectilinear shapes, has been described as expressionist. Its creator, Vietnamese architect Dang Viet Nga (also known as Hằng Nga), who holds a PhD in architecture from Moscow State University, has acknowledged the inspiration of Catalan Spanish architect Antoni Gaudí in the building’s design. Visitors have variously drawn parallels between the guesthouse and the works of artists such as Salvador Dalí and Walt Disney. Since its opening in 1990, the building has gained recognition for its unique architecture, having been highlighted in numerous guidebooks and listed as one of the world’s ten most “bizarre” buildings in the Chinese People’s Daily.