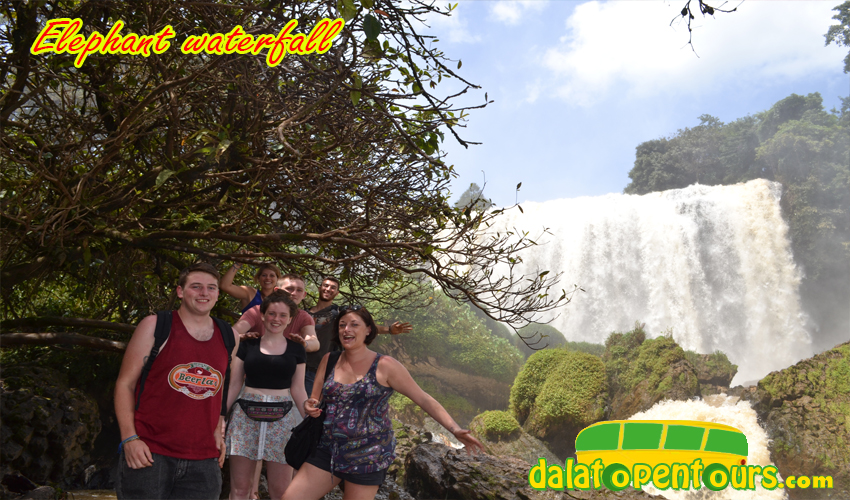 Elephant Waterfall is located about 33 kilometers southwest of Da Lat City of Lam Dong Province in Nam Ban Town, Lam Ha District.
This waterfall, also called Lieng Rowoa Waterfall, is considered as the most beautiful and majestic waterfall in the highlands province of Lam Dong. It is more than 30m high, about 15m wide with the water flows make an area be obscured by the very white spray.
The transparent water flowing through granite mountain sides looks really spectacular, especially when the waterfall is illuminated by the brilliant sunlight, seven-coloured rainbow will appear.
Next to the waterfall is Gio (wind) Cave. The road to enter the cave is narrow between two cliffs, but inside the cave there are many wide spaces and full of wind. Elephant Waterfall looks like a lively picture which has been carved by nature with the particularly interesting caves hide after craggy cliffs and many rocks now appear, now disappear look like as many elephants are jostling to bath. At the foot of the waterfall stream there are many large, flat and smooth stones like the nature set up to offer tourists sit to chat.
Elephant Waterfall is waiting to be discovered by the natural lovers. The waterfall is still keeping the original's features. Some guest houses, tourist clubs, some poetic bridges are looming in the deep eyesight. Every year, the Elephant Waterfall welcomes thousands of visitors in Vietnam travel. If you are the people who like wild, quiet, go to this place to contemplate the hills and mountains, pine forests and rocky waterfalls.